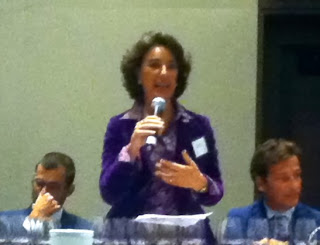 I  attended the 2013 Institute of Wine and Italian Quality.  There were 19 producers from all regions of Italy producing wines of the highest quality with in their Domination of Quality Controlle which is located on all bottles of Italian wines as DCOG. This is the consumer guarantee of wines produced within the growing area.  This insignia is specific to each area of Italy that has been granted its own DCOG.

WHO WAS THERE?
The producers who were present are some of the top line families not only in Italy but Europe as well.  Some of those families are:  Antinori, Gaja, Donnafugata, Lungarotti, Mastrobernadino, Alois Ladeger, Umani Rochi, Michele Chiarlo, Pio Ceasare, Folonari, Biondi Santi and Masi to name those most well known in the American market.  A point was made that other than France the largest market of imported wine in the United States is Italy.

WHY DID THEY COME TO THE UNITED STATES?
The producers were very candid in the fact that they understand what France has done and why it is such a force in the world wine market.  This group has seen what the French do with respect to how they show their wines.  Every year the Bordeaux Syndicate of wines travels across the major cities of Europe, North America and Asia and presents the wines of classified Bordeaux to the world market.  This introduction not only gave the press and public a chance to evaluate the wines but also generates publicity that as individuals they could not have  access to.  This group of 19 producers have evolved over more than a decade. Their current rule of thumb is to keep membership limited and the only way a new member winery can be admitted is by a vote of 100%.  This was greeted with many laughs as it was suggested that getting total vote was very difficult.

THE WINES
We came to taste and understand the process of how these wines come to the market.  Each family member told stories of how their families dedicated themselves to vitculture and production. Here is a list of highlights of what was tasted and why they merit your time.

Ca' del Bosco Cuvee ANNAMARIA CLEMENTE 2005  Here they have produced a Pinot Noir which is vinified to make a Blanc de Noir. The Pinot Noir is aged seven years on its lees and the end result is a stunning pink colored lightly bubbly 12% alcohol wine of total finesse.  Light in flavors and quite complex in aroma. This wine demands all your attention and critical senses.  Retail $120

Sassicia Bolgheri DOC 2010  This wine is the king of Cabernet Sauvignon. I was amazed to find that total production was only a few thousand bottles per vintage.  This in my mind was one of the top wines presented. Aged for two years in French oak and held for another six to twelve months before release.  Sassicaia means Stony ground which is the basis of the name.  This is great Cabernet, your next choice is to determine if it meets your needs at about $225 a bottle.

Antinori Tignanello Toscana  2010  This Sangiovese based red is the flagship wine of the Antinori Estates.  Piero Antinori addressed the fact that this wine is what is best about Sangiovese and Italian wines overall. Since the first vintage in 1971 the wines have gone from strength to strength.  The vineyards are from 1200 to 1300 feet in altitude.  The wine undergoes full malolatic fermentation in small oak barrels.  Very high quality.  Retails price $85

Angelo Gaja Barbaresco 2010  Made from 100% nebbiolo grapes from fourteen parcels of land in the DCOG.  This wine is of a lighter color and has more finesse rather than power. The parcels are kept separate and tasted a year or so after harvest to determine which go into the final bottling.  Family members and the winemaker gather and taste to determine what the final wine will be.  This is a wine that provides ample flavors for those who are looking for complexity rather than power.  Retail $220

Pio Cesare  Barolo "Ornato" Serralunga  2009 100% Nebbiolo that has been aged for 36 months in mostly new oak.  This wine qualifies as a reserva and is very bold and forward. The years in barrel have not made this wine soft and it will require a few more years to open up and express the fruit that is at present not showing itself.  This is an old world type of wine that is meant to be cellared which is not part of the current trend in drink me now wines. That being said it is very good.  Retail $110

Folonari " La Fuga"  Brunello di Mantalcino 2008  This was one of the outstanding wines of thez day.  Full red color with high aromatics of berry, cherry and roses.  Tannins are integrated and make this wine easy to enjoy but with the backbone to age. They use Hungarian, Slovenian and French oak in the aging process. It is only a 7 hectare vineyard and produces just 30,000 bottles.  Three years in oak and one year in bottle before release.  This is fantastic Brunello!!!  Retail $66

Biondi Santi  Brunello di Montalcino 'Greppo" 2008 This estate is the King of Brunello. They have in their cellar wines up to 100 years in age.  They are the only estate with their own clone of Sangiovese Grosso.  The wine ages for three years in large barrels and then one year in bottle prior to release. This wine is elegant rather than powerful.  The most well known estate in Tuscany. This gem of a wine will retail for  $170

DONNAFUFATA Mille e Una Notte Rosso Contesse  2008  Jose Rallo (above) presented this great example of Sicilian wine. Mostly Nervo d'Avola that shows depth and great red color.  There are very heavy berry aromatics and solid tannins to keep the wine in balance.  Aged in new french oak for more than a year and then held in bottle for more than two years.  This is not a lighweight wine but it has layers of fruit and aroma that keep you coming back for more. It smells and tastes like more than the 13.% alcohol on the label but it carries itself well.  Retail $80

Masi Osar Rosso Del Veronses  2006  This wine is an experience in itself as the grape variety is rarely ever seen.  Oseleta is a vitis vinifera found by the Masi family. Its roots are from the period when Greeks were in Italy and grew grapes.  The Masi label tells you the grape variety, vintage, alcohol, vineyard and bottle production.  This wine comes from a small 8 hectare vineyard and produced under 5,000 bottles.  This is a great experience is tasting a clone of red wine I have never seen or heard of before.  Retail $70

This was an outstanding event and it provided an understanding of the different areas and their challenge to grow world class wines.  It also underscored the Italian ideal of wines which match with food and give pleasure on their own. The wines above are names and labels you may well see in retail or restaurant lists. They produce other bottlings which are also of the highest quality. Try one with friends over a nice dinner and experience some of the sun of Italy