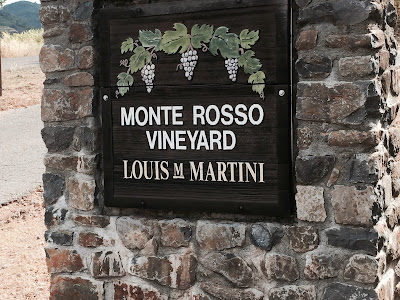 
I recently was able to tour the historic Monte Rosso Vineyard of Louis M. Martini winery with my good friend Joe Becerra of winecountrygetaways.com.  During this visit we learned so many facts about this historic place in the hills of the Mayacamas mountain range.  This vineyard has been the source of a major portion of older vintages of Martini Special Select and Private Reserve from the early 40's to well into the 80's and still is part of their Napa bottling.   The vineyard is a total of about 500 acres of which 250 are planted with grapes.

HISTORY
The vineyard was founded and built by Emmanuel Goldstein in the early 1860's.  He was a well to do grocer who turned his interest to wine and with the labor of early Chinese immigrants the land was cleared and the vineyards were established.  In 1886 he built a stone gravity fed winery on the property.  This facility has been deemed unsafe since the earthquake of 2014.  There are no plans at present to reinforce the building. The keystone with the founding date is visible from the road.  The vineyard changed hands a few times and continued to produce fruit through prohibition.  At he end of prohibition Louis M. Martini bought the vineyard named Mt. Pisca and named it Monte Rosso due to the deep red volcanic soils. These came about as a result of the volcanic eruption of Mr. Veeder thousands of years ago.  E.J. Gallo purchased  the Louis Martini winery in 2002 and with it Monte Rosso.  Today they continue the Martini tradition of excellence in the vineyard.

VINEYARD
We were able to get up and close to the area with information provided to us by Ranch Manager Brenae Royal. She is responsible for information about all facits of the growing cycle. When asked what was a problem with vineyard health her response was mites.  Because it can be so dry and dusty there are a large number of them.  They are using natural predators but it is an uphill battle. I was amazed at the vigor of the old vine Semillion !!

The major reason the vineyard is so unique is that it is the home to more than 40 acres of vines which are from the 1890's as well as more than 75 acres of 75 year old Cabernet Sauvignon which were planted by Martini in 1938.  The following red grapes are grown: Cabernet, Petite Sirah, Syrah, Malbec, Petite Verdot, Cabernet Franc and Sangiovese. The older rootstock is St. George and that stood Philox?).  What is also unusual is that there are two blocks of white grapes on the property. There is a 3+ acre parcel of 110 year old Semillion and another block of Folle Blanche that dates to the late 1930's.   All the red wines carry the signature rich full mouth flavors of red fruit and solid acidity and tannins. Once you taste a Monte Rosso wine you begin to understand that the flavors produced here are unique to this site only.

PRODUCERS
There are a number of wineries who produce Zinfandel or Cabernet from this vineyard.  Martini produces Monte Rosso fruit that is made at their mini winery,  Winery 254 located at the back of the main wine making facility. Ed Sbragia gets his Cabernet partly because he and Mike Martini are old time musicians who play together and they have know each other for decades.  Mike Carlisle and Morgan T. Peterson get their grapes as part of their mission to produce wines from heritage sites in California. Others are: Rockwall, Rosenblum, Rancho Zabaco, Biale and Ravenswood.  They all produce classic renditions of this site.  The average cost of a bottle of Monte Rosso is in the area of $40/60 a bottle.  The cost of fruit is quite high and you can understand when the quality of the wine is so high.

FLAVOR PROFILE
Morgan Twain Peterson has the best explanation of Monte Rosso and the wines produced.  All varietals grown provide the aromas and flavors of the vineyard.  Cabernet, Zinfandel, Syrah you name it they all have the imprint of the vineyard.  You smell and taste Monte Rosso before you get the the varietal character.  This is what makes Monte Rosso so distinct and unique.  You must try some soon.